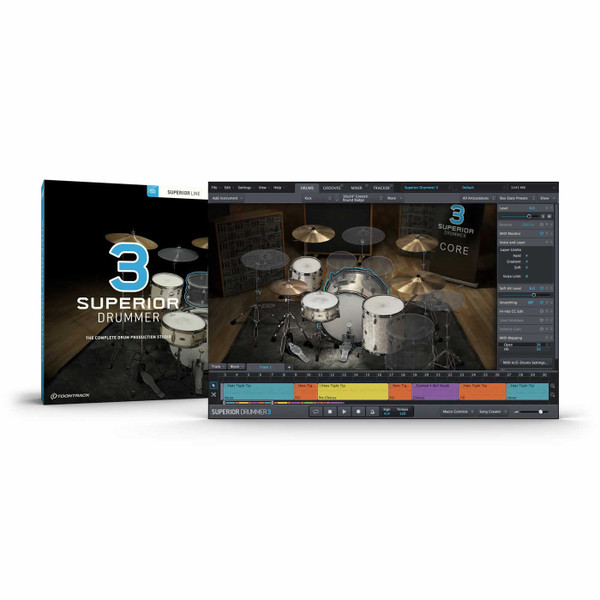 WELCOME TO THE FUTURE OF DRUM PRODUCTION.
In addition to a massive library of raw sound material, Superior Drummer 3 introduces a unique design*, a streamlined workflow and countless features for powerful drum production in your computer. With Superior Drummer 3, you have control and creative power beyond the imaginable. Welcome to the future.

PLEASE NOTE: This title is a digital download and requires a free ToonTrack account. After purchase ToonTrack will provide us with a valid licence in the form of a serial number that we will then forward to you. This process can take up to a day to complete.

FEATURES – AT A GLANCE.

A CREATIVE PLAYGROUND WHERE NO RULES APPLY.

The idea with Superior Drummer 3 is to let you step into a virtual studio with the best possible raw material and mix options at your disposal to create drum sounds in an environment where only your imagination sets the limits. Combining the creative power of the sounds, the ambiences and the extensive set of features, Superior Drummer 3 is more than just a drum sampler – it’s a bottomless well of creativity. It bridges the gap between acoustic and electronic and lets you venture off into completely new sonic landscapes. This is the definitive tool for percussive sound design.

IMMENSE AND IMMERSIVE, CAPTURED WITH LAYERS OF TECHNOLOGY.
The Superior Drummer 3 core sound library was recorded by award-winning engineer George Massenburg at probably the world’s most quiet and ideal location for sampling, the Galaxy Studios in Belgium. The library boasts in excess of 230 GB of raw sound material captured in extreme detail.  In addition to close microphones and several ambience positions, the Superior Drummer 3 setup also includes eleven room microphones set up in a surround configuration, for use in anything from stereo to 5.1, 9.1 and all the way up to 11.1 systems. In combination with the large selection of extra instruments added for stacking and sound design purposes, the sounds of Superior Drummer 3 give you an incomparable palette of options to craft drum tones beyond your wildest imagination.

The Superior Drummer 3 core sound library was recorded at Galaxy Studios in Belgium. With its 330 square meter room and eight meter ceiling height, it was the ideal location for capturing immersive audio of the utmost quality. In addition, the entire studio complex is built on springs to ensure that the outside interference is literally nonexistent. In fact, with only 14 dBA of environmental noise, the main hall at Galaxy Studio is the most quiet recording space of this size in the world.

Perfect acoustics, balanced reverberation and second-to-none recording technology. Superior Drummer 3 called for a superior studio. We’d dare to say that this is the most nuanced and candidly captured sample library on the market.

GEORGE MASSENBURG. SUPERIOR ENGINEER, AUDIO PIONEER,
PROFESSOR AND INVENTOR.
George Massenburg’s contribution to the world of audio technology is hard to emphasize in words. Aside from having produced, mixed or engineered in excess of four hundred records, received almost any industry award thinkable, been inducted into the Technology Hall of Fame and received an honorary Doctorate of Music at the esteemed Berklee College, he is the inventor of an industry staple: the parametric equalizer. His attention to detail, accuracy and quality is second to none.

Superior Drummer 3 called for a superior engineer. These are his drum sounds – captured with layers of technology and a lifetime of experience to back it up.

Over the past four decades, George Massenburg has been involved in over four hundred records. His work includes milestone albums by Earth, Wind & Fire, Linda Ronstadt, Natasha Bedingfield, Herbie Hancock, Billy Joel, the Dixie Chicks and many, many more. George’s work has gained him world wide recognition and four Grammy Awards, including the Grammy for Technical Achievement in 1998, at the time making him one of only seventeen individuals to ever receive this honor. In addition to numerous Mix Magazine TEC Awards, in 1988 he also won the Academy of Country Music Record of the Year Award for his production on the album “Trio” featuring Dolly Parton, Linda Ronstadt and Emmylou Harris. Further, George has designed, built and managed several recording studios as well as contributed to the acoustical and architectural design of many other studios, including George Lucas’ Skywalker Sound. In 1982, he founded George Massenburg Labs, an audio electronics company that has released an extensive range of innovative recording technologies, all based on his original designs.

In 2013, he was awarded a patent #8,510,361 in the US (as well as other countries) for a variable exponent averaging detector and dynamic range controller. He is also a member of the National Recording Preservation Board of the Library of Congress and an advisor to the Committee for Library Information Resources. George serves as the Chief Technical Officer of META (the Music Engineering Technical Alliance), a strategic union of music producers and engineers dedicated to the highest standards of audio and delivery of music.

George has also been awarded an honorary Doctorate of Music by Boston’s esteemed Berklee College of Music. Currently, he is an Associate Professor of Sound Recording at the Schulich School of Music at McGill University in Montreal, Quebec, Canada and a Visiting Lecturer at the Berklee College Of Music in Boston and Valencia, Spain as well as the University of Memphis in Memphis, TN.

THE HEARTBEAT OF YOUR SONG.
Superior Drummer implements several groundbreaking features for working with any aspect of your drum MIDI content – right inside the program. The idea is that regardless of what you are attempting to accomplish, you should never have to leave the framework of Superior Drummer 3. From quickly getting a custom beat going to laying out entire songs or diving deep into fine-tuning timing and velocity detail, Superior Drummer 3 has got you covered.

Add to this the comprehensive Superior Drummer 3 MIDI library, covering a wide range of styles, and you have a wealth of inspiration to use to craft your custom drum tracks from.

Think of Superior Drummer 3 like stepping into the control of a world-class studio and taking a seat at the mixing console. Outside the glass windows, in the massive hall, there’s a wide array of drums of all sizes, makes and models, all set up and ready for you to hone to fit your mixes.

With Superior Drummer 3, you are in control. Only your imagination sets the limits.

A NEW BREED OF AUDIO TO MIDI CONVERSION.
The Tracker introduces the arguably most efficient and accurate drum audio to MIDI conversion software on the market. Built on a highly advanced instrument recognition neural network, the Tracker detects hits with an unequalled accuracy and speed.

With the seamless integration with Superior Drummer 3, replacing or augmenting drums has never been more powerful than now. Simply drop your drum audio material in Tracker, let it quickly analyze your content and in no time, you’ll be able to preview the MIDI based on your original tracks. Start blending, augmenting, replacing and creating!

MAKE YOUR ELECTRONIC KIT SOUND LIKE YOU.
By combining smart software features with extreme sample detail and nuance, Superior Drummer 3 bridges the gap between the “e” and the drums, making your electronic kit every bit as “real” and acoustic as it can be.

Superior Drummer 3 was designed with you in mind, the demanding e-drummer. Get started playing instantly with one of the the new e-drum presets, or customize the way the software responds to your playing with new, easy-to-use controls on the dedicated e-drum settings tab.

The e-drum settings tab is used to transform incoming MIDI to the standard of any loaded sound library without affecting the playback of your MIDI files. This makes it easy to combine your own playing with any MIDI files available from Toontrack. It also offers quick access to the MIDI controls most frequently used, like hi-hat pedal and snare CC response. Controls and articulations for the mapping of custom kits and pads with multiple zones and positional sensitivity are available as well.

All this in combination with optimized velocity response, humanization and up to 25 velocity layers per instrument in the Superior Drummer 3 core library will make your playing more expressive and well-rounded than ever!

DOWNLOAD CONFIGURATION.
Due to the size of the library and to ensure that each customer freely can decide in what capacity he or she wants to utilize the source material, the product is configured in six (6) convenient download packages. Start by installing the software and then add each package in sequence as you go.

Parts 1, 2, 3 and 4 need to be installed in sequence. However, as soon as you have installed part 1, you can jump straight to installing the Additional Bleed part.

Room mics
The rest of the room microphone channels (OH Cond, Amb Near and Amb Mid).

Additional Bleed
All remaining instrument bleed, meaning the sound picked up by microphones other than the one(s) directly intended for a specific instrument or ambience.