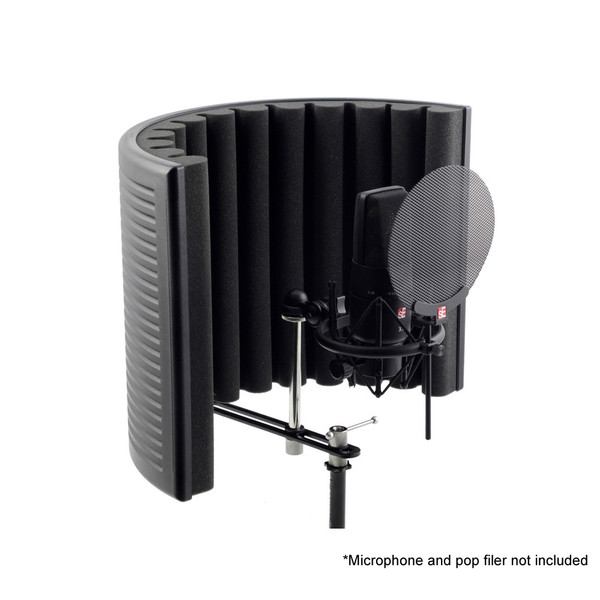 The RF-X is an instant vocal booth for any home studio.=

Unwanted room sound interfering with your recordings? With the RF-X, anyone can capture a great-sounding recording anywhere.

Using the same design technology as the industry standard Reflexion Filter® PRO, the RF-X was conceived to answer the needs of the discerning recording artist working on a budget. With its lightweight vented body and an efficient, redesigned clamp assembly, the RF-X is simplicity itself, providing stellar performance and ease-of-use.

New materials have been developed to make the RF-X lighter than its predecessors but also to maintain its durability – helping to position the RF-X as a versatile product suited for any challenging working environment. It features a four-layer acoustic filter design comprised of the outer vented composite panel, a wool fabric layer, an air gap layer and an inner acoustic foam layer.

This multi-layer design differentiates the RF-X from its competitors by filtering frequencies evenly across the whole spectrum, helping to ensuring that recordings exhibit almost zero sound coloration when using the filter.

And just like the RF Pro and RF SPACE, each RF-X is assembled by hand in the sE factory.

When you put a microphone in front of you, it doesn't just hear you - it hears the room around you.
Even if it's a cardioid mic and is listening mostly to just you, it's still picking up reflections from your voice or instrument that are bouncing off the walls and coming back to the mic. The goal of acoustic treatment is to minimize the pickup of such reflections so your primary sound source comes through as pure as possible.

So why not just put some cardboard or foam behind the mic?
Some materials are good at absorbing or reflecting particular frequencies - for example, foam absorbs highs really well, but does nothing for lows.

Unlike cheap foam RF imitations, sE's patented multi-layer technology works evenly across the whole frequency spectrum to ensure a balanced, even sound with no coloration at all.

This is what makes the Reflexion Filter® unique, and makes it the choice of the biggest recording artists in the world - whether they're working in untreated rooms, or working in a professionally-designed studio and just need a little more isolation.

USER QUOTES
"The RF-X Reflexion Filter does a great job of dampening room noise for vocalists, giving you a dry vocal sound to which you can add effects in the mix. In practice, we found it worked really well, getting the same result as far more expensive options."
- MusicTech Magazine, July 2017 (full review)

on the Reflexion Filter® Series:

"Everyone should have one."
- Ryan Hewitt, Producer/Engineer (Red Hot Chili Peppers, The Avett Brothers) - sE Artist

"I like to do vocals in the control room - much more direct interaction with the vocalist, so it's perfect for that. With so many of us working in all sorts of situations these days, the Reflexion Filter transforms any of these into a viable recording environment."
"I also think it's a wonderful device for students to know and learn about, to hear the difference with and without the filter. All audio schools should have them."
- Lenise Bent, Producer / Engineer (Blondie, Steely Dan, Supertramp, The Band, Fleetwood Mac)

"I’ve used them on vocals and instruments alike where I either need more isolation from other sounds/instruments in the room, or I don’t like the character of the room and I’m trying to minimize the amount of room sound pulled into the mic."
"You can never have enough tools and tricks to get the job done. This is exactly the kind of tool that, once you have it, you’ll use it over and over."
- Neal Cappellino, GRAMMY®-winning producer/engineer (Brad Paisley, Vince Gill, Alison Krauss & Union Station) - sE Artist

"The Reflexion Filter has made a big impact on the quality of our home recordings. Never again will an amazing vocal take be marred by intermittent meowing or the sound of the fridge!"
- Tegan and Sara, pop musicians - sE Artist

"Trust me, they will change your recording process for the better."
- Ricky Lawson, Drummer (Michael Jackson, Quincy Jones, Whitney Houston)