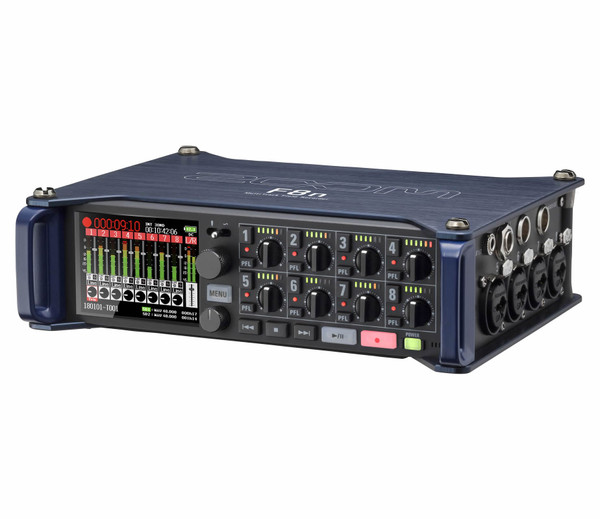 Some make sound. Others make history.
When developing the F8n, it was Zoom's mission to provide every sound professional with the tools to create something exceptional. With features such as Advanced Look-Ahead Hybrid Limiters, Zoom AutoMix™, and mic/line options for both XLR and TRS inputs, the F8n is the next generation of professional field recording.

A Recorder You Can Depend On. Every Day.
"When you’re putting together a kit, you shouldn’t have to compromise.
I don’t think there’s anything that I couldn’t do with the F8n."

ZOOM STACKED THE DECK
Advanced Look-Ahead Hybrid Limiters
The F8n is equipped with Advanced Look-Ahead Hybrid Limiters that provide overload protection no matter what comes your way. By adding a 1 millisecond delay, the limiters “look ahead” anticipating clipping before it’s recorded. Limiting is applied to each of the 8 channels simultaneously at full resolution, with 10 to 20 dB of headroom to ensure pristine audio on every take.

Mic Preamps
The F8n features a super-low noise floor (−127 dBu EIN) and high gain (up to 75 dB). Mic/line levels are selectable for both XLR and TRS inputs. Zoom AutoMix™

Zoom AutoMix™
Meet your new assistant sound editor, the Zoom AutoMix™. This smart software automatically adjusts the levels of your mix to reduce the amount of ambient sound, so you can focus on what really matters – capturing a well-balanced mix.

State-Of-The-Art Time Code
The F8n utilizes a Temperature Compensated Crystal Oscillator (TCXO) that generates time code at 0.2 ppm accuracy, enabling rock-solid syncing of audio and video. When powered off, the F8n will maintain up to 0.2 ppm accuracy. Time code I/O is provided on BNC connectors.

Simultaneous-Recording
The F8n can record to an SD card and your computer via USB simultaneously. For use during livestreaming, file back-up and more. And you can easily back up your files and stream live while recording.

Three Power Sources
A 4-pin Hirose connector allows the use of external 9-18 volt DC battery packs. Power can also be provided by 8 AA batteries or the AD-19 AC adapter included with your device. The F8n can switch power sources at a user-defined voltage level for uninterrupted recording.

Dual-Channel Recording
The F8n’s dual-channel recording mode allows you to create safety tracks by doubling up the recordings from inputs 1-4 onto tracks 5-8. Tracks can be controlled independently, allowing you to customize each safety track with different gain, limiting, and more.

Pre-Record
The pre-record function allows you to capture up to 6 seconds of audio before you hit the RECORD button.

LOUDER, CLEANER AND CLEARER MONITORING
Volume, clarity, and immersion are equally important for proper monitoring in the field. That’s why updates have been made to the F8n’s headphone processing to maximize all three. A digital gain boost has been added to minimize ambient bleed, which can cause comb filtering resulting in poor audio quality.

Signals can be freely routed to the left and/or right headphone channels, pre- or post-fader. Additionally, the headphone output can be switched to mono. You also can set headphone alert tones for low battery, recording start/stop, or recording errors.

ZOOM F-CONTROL
Sold separately, the Zoom F-Control FRC-8 is the control surface that no serious rig is complete without. With 60mm faders and clear channel indicators, the F-Control’s simple, ergonomic design gives you complete authority over your workflow. Pair your F-Control with the Zoom F8 Control App to turn your iPhone or iPad into a large-scale meter monitor for easy reading.

360° AUDIO
Ambisonics
Capable of recording 360-audio, the F8n is a must-have for engineers of the future. The F8n’s Ambisonics mode features A to B decoding, gain and settings linking, and a customized metering screen.

The VR Dream Team
For the ultimate VR rig, pair the Zoom F8n with a Sennheiser AMBEO mic. Built for mobility and backed by two quality names, this combination lets you capture premium 360-audio anywhere and everywhere.

File Formats, Resolution, and Sample Rates
The F8n records in BWF-compatible WAV formats up to 24-bit resolution and at sample rates up to 192 kHz. When recording files in MP3, you can choose bit rates of 128, 192, or 320 kbps.

Metadata
Full Metadata entry is available including track name, scene names, notes, and more. Use your smartphone or tablet to enter your data via the Zoom F8 Control App for iOS or input it directly on the F8n.

Processing
The F8n features flexible signal routing from all inputs to all outputs. In addition to advanced hybrid limiters, the F8n also provides high-pass filtering to reduce the sound of wind and other noise, plus phase inversion and Mid-Side decoding. Input and output delays are also available. What's in the Box
Here's what comes included with the F8n