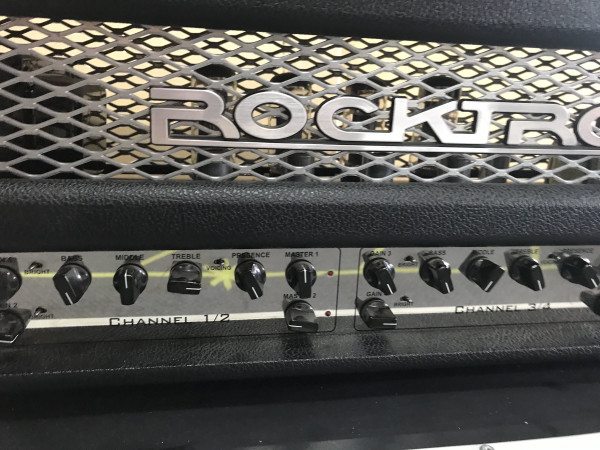 This Rocktron Vendetta, designed by Bruce Egnater and based on his TOL series, made in the USA, not to be confused with the later hybrid import Vendetta, has been in our store stock since new. It has been played sparingly in store over the years and is in excellent condition. The original shipping box is even in storage downstairs, but the box has seen better days!

The original blurb for the Vendetta went thus:

The Rocktron Vendetta 100W Tube Guitar Amp is a loud, proud rock and roll amp head with the versatility needed for today's modern players. With its 4 channels, each with separate gain and master controls and bright switches, the Vendetta amp head may be the most versatile tube amp ever produced. These Rocktron amps let you go from edgy mod rock to screaming, over-the-top" heavy metal and hard rock sounds.

The Rocktron Vendetta generates 100W of tube power into 4, 8 and 16 ohms. EL34 power tubes are the choice here, and to make life easier on the road Rocktron has included external bias test points and adjustments.

With its two sets of "British" style tone controls with a special voicing switch for Vintage or Modern sounds, you'll be hard pressed to find an amp that delivers more. Master, Presence and Density controls add to the sonic party.

Designer Bruce Egnater has thought of everything, and to make life easier, the Rocktron Vendetta features MIDI controlled channel switching. Nothing too complicated, just enough to give you that extra control. Rounding out the features are separate series and parallel effects loops and a mix control for the parallel loop.

This is the a groudbreaking tube amplifier for the new age. The Vendetta 100W Tube Head delivers the goods whether you're looking for a pop tone, a blues crunch, screaming raunch, or a scorching thud. We defy you to find a chunkier amp that delivers this much throttle and raunch.

Stomp Box Classic - Made in Australia by Stu Box

Stomp Box Atom - Made in Australia by Stu Box

Stomp Box Wedge - Made in Australia by Stu Box