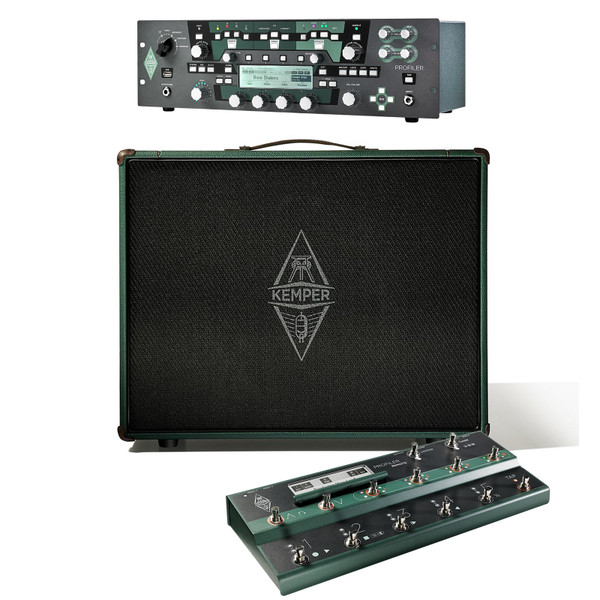 Your ultimate Kemper Rig - containing the 600 Watt Kemper PowerRack, the Kemper Kabinet™, and the essential Kemper Remote to run it all.

Now available with a super light Neodyme KEMPER Kone speaker, the KEMPER Kabinet™ offers guitar tone monitoring with a choice of 19 classic guitar speaker imprints for PROFILER players with their KEMPER PROFILER PowerRacks and PowerHeads.
With just around 10 kg (23lb) of weight, it is lighter than its predecessor, features the built-in slanted stand, known from the KEMPER Power Kabinet™, and comes with a dust cover.

The KEMPER Kabinet™ is specially designed for the PROFILER. The KEMPER Kabinet is a combination of the new KEMPER Kone™ NEO neodymium loudspeaker and an exclusive and unique speaker tone mining technology developed by KEMPER, making it possible to digitally „imprint“ various speaker characteristics onto one single cabinet.

The acclaimed 2022 TecAward nominated KEMPER Power Kabinet already features that same KEMPER Kone NEO speaker already since day one, making it one of the lightest active cabinet for guitarists.

NOTE: The neodymium version of the KEMPER Kone replacement speaker will also be available in the near future. However, due to omnipresent sourcing challenges, the production run cannot be precisely scheduled yet.

The KEMPER Kabinet can be driven by the power amp of a PROFILER PowerHead™ or PowerRack™, as well as by utilizing any external solid-state power amp. When using exter-nal stereo amplifiers, driving two Kabinets in stereo is possible. The unpowered PROFILER models like Rack, Head, and Stage require also external power amps for driving the Kabinet NEO.