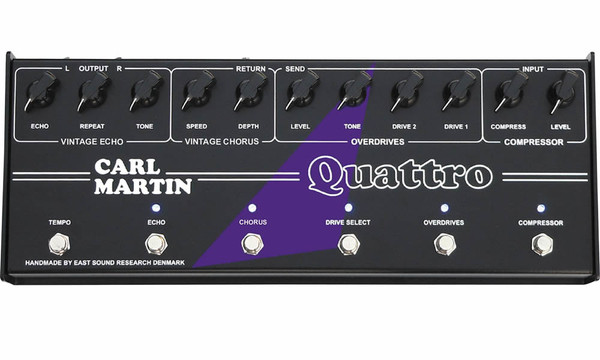 With classic guitar tone disappearing down the road of digital modeling amps and effects, Carl Martin is proud to introduce the Quattro, four of the most popular Carl Martin effects in one package.

The Quattro begins with Carl Martin's award winning Compressor/Limiter circuit with single controls for compression and level. The Two-Channel Overdrive has switches for on-off, and for selecting between the crunch and high-gain stages, and controls for tone and level. In classic fashion, the Vintage Chorus has a speed and a depth control. Finally, the vintage style Echo has controls for level, tone, repeat and tap-tempo, as well as an on-off switch. No hard to read screens, no menus to scroll through, just set-up and play. There is no simpler multi-effect on the market! There is also an effects loop built in between the overdrive and chorus effects for that special drive or fuzz pedal that is part of your sound.

You also get that famous Carl Martin build quality, ultra quiet switching, a high quality on-board regulated +/-12V power supply which allows us to use the finest components allowing the greatest amount of headroom, and low output impedance which leaves your amp sounding exactly like your amp.

General Guidelines on the use of the Quattro:

It boasts the same DC-DC circuitry, and most of what is true of one pedal is also true of the other. Soundwise, however, there’s a dramatic difference. Since clean tones aren’t the focus, there’s not a lot of “chime,” but there is plenty of smooth Vox-y overdrive and gobs of glorious gain, which makes for one fab tone machine

Compressor: Compression is a very good effect for overall use, it smoothes out your uneven dynamics, increases sub tones which otherwise would stay too weak in the overall sound. It also gives more depth, body and sustain for a fuller sound. This is great for especially solos. Just set the level knob to match the desired solo level. For more compression turn the compress knob clockwise, and adjust your level to match the bypass level.

Overdrives: Drive 1 is the crunch channel, Drive 2 the high gain channel. To enter drive 1, press the drive switch and set the level to match the bypass level. The tone knob works like a high cut filter. Set the knob at full clockwise for high crisp tone or for warmer and rounder tone, turn the tone knob counter clockwise. To enter drive 2 leave the drive switch on and press the select switch. The level and tone knobs are the same on both channels.

Vintage Chorus: The Vintage Chorus is a very useful effect to make your tone fat round and singing, an effect very often used in loads of hit songs from the early 7o´s and up. The Speed knob set the speed of the modulation, from slow swirl to fast Leslie like tones. the Depth knob determines the amount of effect wish.

Echo: The echo effect is designed to emulate the old vintage tape echo units, with all that they had in low-fidelity noise and distortion. It has extremely musical and warm echo, so don't expect any clean sterile digital delay here. To enter the echo mode press the echo switch and set the echo level on the echo knob. Turn clock wise for more effect. Turn the repeat knob clock wise for more repeats. The tone knob works like a filter with clear crisp echo's in the full clock wise position and warmer vintage style echo when turned counter clockwise. The echo time is set on the tempo tap switch and it goes up to 1000 milliseconds. Please note that once disconnected from power, the echo time will revert to the shortest time.

Loop: The loop is a serial loop placed between the overdrives and chorus, so it's possible to add another of your favorite distortion boxes with the compressor and overdrive in front of it, and the chorus and echo after it. It is also the right place to put in another modulation effect like a tremolo, flanger or phaser. The loop has low impedance out and high impedance return.

The Quattro is not true bypass, however, the high quality output buffer circuitry ensures noise free operation with long cabling from unit to amplifier, even on large stages.

Carl Martin Guitar Effects, Guitar Amplifiers, Bass Amplifiers, Strings & Accessories from Denmark.
Their goal was, from the very beginning to develop and produce products for the demanding professional musician, with a superior sound quality and features not seen on any other guitar effect pedal.
Due to their extensive knowledge of the professional music industry, and their ...contacts with a wide range of demanding musicians, they have been able to maintain a high quality of products and now have a range of 28 high quality guitar effect pedals, with more to come in the future.
In 2005 Carl Martin released their first point point handmade tube amplifier the Custom Shop 50, the line now includes heads, cabs as well as a bass system.